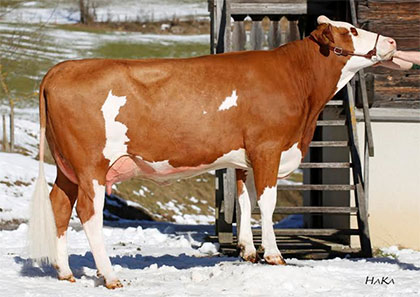 Gerard's parents Tom & May Brickley imported their firs Fleckvieh from Austria in 1974, and later purchases from leading Irish herds, as well as imports of livestock, embryos and semen from Austria, Denmark, Germany, Canada and the UK. The Celtic herd, which specialised in developing the beef bloodlines was dispersed in November 2013 to facilitate a change in farming practice to Dairying, in time for the abolition of EU Milk Quotas in April '15.

The dairy enterprise was initially established, based on Holstein genetics, due to availability and price. However, after undertaking some research work on behalf of the Irish Simmental Society, we became interested again in Simmental / Fleckvieh, this time, looking at the Dairy/Dual Purpose bloodlines, now commonly called "Dairy Fleckvieh". We travelled to Austria, the Netherlands and Northern Ireland to see the Dairy Fleckvieh as a pure breed, and also to see how they were performing in cross-breeding / commercial herds. We were very impressed, firstly with the number of pure herds in Austria averaging in excess of 10,000 litres, and also with the excellent health and functional traits seen in the high yielding cross bred herds in Northern Ireland and the Netherlands.

The Celtic Pedigree herd now comprises mainly Dairy Fleckvieh, with some cross breds from the original Holstein Friesians still remaining and being graded up to pure Fleckvieh.  All youngstock are now either pure Fleckvieh or Fleckvieh crosses. Fleckvieh are now being crossed on the entire Holstein herd,  The introduction of the dual-purpose Fleckvieh has resulted in significant improvements in cow strength and health traits, and much higher male calf and cull cow income.

Our cross bred Fleckvieh calves are consistently averaging €330 - €350 in local auction marts.  Allowing €2 / day for the 3 weeks extra milk, that Fleckvieh cross calf still left at least €200 more than if he were by a Holstein/Friesian out of the same cow.  Other advantages include having a surplus of heifer calves in the pipeline, instead of mating the bare 50% of the herd to try to produce replacements, by using Fleckvieh on the whole herd, we never run the risk of being short of replacements.  These surplus heifers are always in demand, and even if one goes wrong in some way, as happens, they still have a very high beef value, and always higher than if they were a pure dairy heifer, either black and white, Jersey, Jersey cross, or New Zeland type.

Photo of one of the last calves bred in the Celtic Beef Simmental herd, with the ruins of Anatrim Monastery in the background and located on the farm, dating back to 550 AD,